Signature Luncheon: Leadership in a Time of Crisis

Name: Signature Luncheon: Leadership in a Time of Crisis
Time: 11:30 AM - 1:00 PM EDT
Registration: Sorry, public registration for this event has been closed. 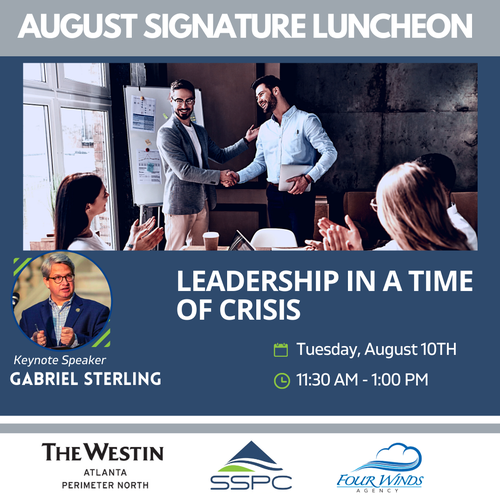 Join us for our monthly Signature Luncheon: "Leadership in a Time of Crisis" on August 10th at the Westin.

The Sandy Springs Perimeter Chamber would like to welcome Gabriel Sterling as our August Keynote Speaker.

About our Keynote Speaker:

Gabriel Sterling is the chief operating officer/chief financial officer for the Georgia Secretary of State, and he is also serving Georgians as the interim director of the Professional Licensing Division of the office.

He gained visibility last year as the Statewide Voting System Implementation Manager when he oversaw the largest rollout of voting equipment in U.S. history with Georgia’s new, secure, paper-ballot system – on time and under budget. In that role, he led the response to the COVID pandemic by securing protective equipment and sanitizer for the counties that run elections. After the November election, he frequently briefed the media on the details of the largest hand recount in the United States and a second recount. He gained worldwide attention when he gave an impassioned defense of election workers and called on President Trump, and others in positions of responsibility, to stop spreading disinformation surrounding the November General Election.

Before coming to the Secretary of State’s office, his involvement with elections was from the other side of the table in that he had a long career as a political consultant with several campaigns on the state and federal level, going back to his teenage years here in Georgia. He also worked as a business and operations consultant to firms as small as $1 million and up to $100 million in sales.

He served in elective office as a member of the Sandy Springs City Council from 2011-2018. He was an integral part of developing the Sandy Springs City Center, passing “The Next 10” a land use plan to protect and enhance neighborhoods, and played a key role in bringing the Mercedes Benz USA headquarters to Sandy Springs, Georgia. He is still involved in his hometown community serving as the Chairman of the Sandy Springs Charter Commission and as a board member for the Sandy Springs Conservancy, an environmental charity focused on preserving green space and enhancing recreation opportunities. He is a graduate of the University of Georgia. In his personal time he enjoys yard work, cooking, and especially engaging in making great BBQ.

Absolutely no walk-ins allowed due to COVID-19 precautions. Registration required. Registration closes on August 8th at 5:00 pm or when the attendance limit is met. No refunds will be given for no-shows nor cancelations. Vegetarian and gluten-free meals will only be served to those who specify such restrictions at registration.
Set a Reminder:
Business Directory Events Calendar Hot Deals Member To Member Deals Job Postings Contact Us Weather
Go mobile with MyChamberApp!