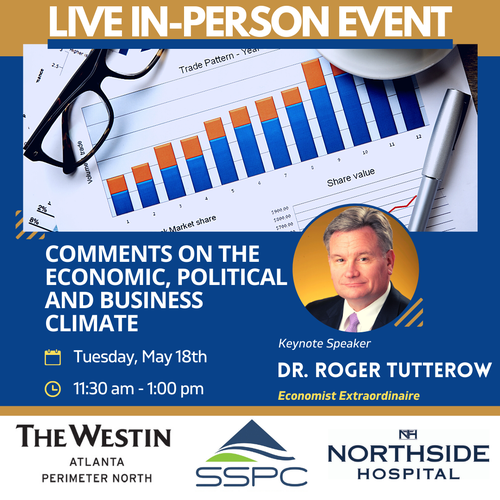 Join us for a LIVE in-person Signature Luncheon: "Comments on the Economic, Political and Business Climate" on May 18th at the Westin.

The Sandy Springs Perimeter Chamber would like to welcome Professor & Henssler Financial Endowed Chair, Director of the Econometric Center Department of Economics, Finance and Quantitative Analysis, Dr. Robert Tutterow of Kennesaw State University, as our May Keynote Speaker.

Dr. Roger Tutterow captivates, educates, empowers, and entertains audiences! This will be a don't-miss event as our first live luncheon since March of 2020.

About our Economist Extraordinaire:

In addition to his work in academia, Dr. Tutterow has served as a consultant on financial economics and statistical modeling for corporate clients ranging from Fortune 500 companies to closely-held businesses. He has provided expert testimony on economic, financial, and statistical matters in state and federal court, before the Georgia General Assembly and before the Georgia Public Service Commission. Dr. Tutterow has given several hundred speeches to professional groups in over 40 states and Canada on topics in the economic, business, and political arenas.

Absolutely no walk-ins allowed due to COVID-19 precautions. Registration required. Registration closes on May 13th at 3:00 pm or when the attendance limit is met. No refunds will be given for no-shows nor cancelations.
Thank you to our sponsors: The Westin Atlanta Perimeter North and Northside Hospital