WBN - Connecting the Community: The Road to Recovery 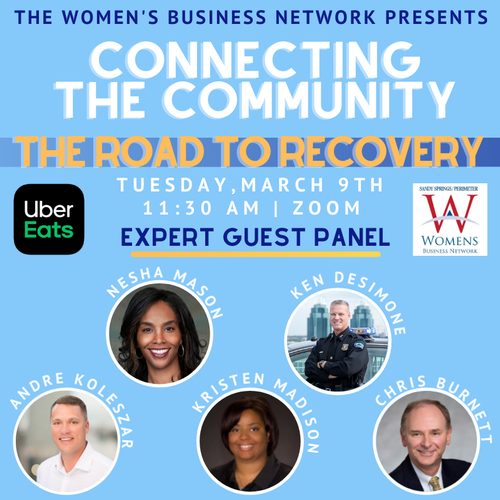 Event Description:
The Women's Business Network presents
Connecting the Community: The Road to Recovery
with an expert guest panel!

Join us to meet members of the Chamber, City Officials, Executives of non-profits and business leaders of Sandy Springs.

Nesha Mason joined The Drake House as Executive Director in July of 2019 bringing a diverse skill set with more than 20 years of experience in both the public and private sectors. Nesha worked as operations director in the private sector before transitioning to public service serving as Mayor for the City of Abilene, KS. After her tenure as an elected official, Nesha served as Program Director for a county-wide non-profit developing programs that united the medical and early childhood communities. Upon relocation to the Atlanta area in 2013, she served as a Fulton County educator then transitioned to executive director of a state-wide educational foundation focusing on unifying education and workforce development. A graduate of Florida A & M University, Nesha holds a B.S. Journalism specializing in Public Relations, as well as numerous certifications in public administration.

Chief DeSimone retired from the U.S. Marine Corps Reserve at the rank of Colonel in 2014 following 32 years of service, predominantly with the Military Police. He is both an Afghanistan and Iraq War veteran, where he led police advisor teams in both countries. Chief De Simone has worked with law enforcement, provost marshal, and gendarmerie forces in North America, Europe, Asia, Africa, and the Middle East.

Chief DeSimone has a B.S. degree in Police Administration from the University or Louisville and is a graduate of the FBI National Academy.

Andre Koleszar is SVP, Senior Market Officer in the Southeast Region with Regency Centers.  Regency Centers is a S&P 500 member and is the preeminent national owner, operator, and developer of shopping centers located in affluent and densely populated trade areas.  Andre is responsible for a portfolio of 50 operating properties, redevelopments and new developments, totaling more than 5.2 million square feet, in Alabama, Georgia, North Carolina, South Carolina, Tennessee, and Virginia as well as acquisition and disposition efforts in the region.  His portfolio includes seven shopping centers in the Sandy Springs/Dunwoody corridor.

Kristen Madison is the Co-Owner of FASTSIGNS of Sandy Springs, a family-owned small business.  She has more than 20 years of work experience including government audit work, practicing law, serving in various roles of increasing responsibility in corporate HR, and small business ownership.  Kristen received her bachelor?s degree from the University of Virginia, and her law degree from the University of Connecticut.  She serves on the Board of Trustees for Leadership Sandy Springs and the Board of Directors for the Community Assistance Center.  Kristen also coaches small business owners through her coaching firm, The Madison Coaching Collaborative.
Chris Burnett, CenterState Bank

Chris Burnett is an Atlanta native and has lived in Sandy Springs for 30 years.  He holds a Bachelor's Degree in Finance from Georgia State University and is a graduate of the Louisiana State University Graduate School of Banking.  Chris has been a community banker in metro Atlanta for over 40 years, beginning his career in 1980 as a bank teller while working his way through college.  He began his senior management career in the early 1990's and over the past 25 years has served as President of four community banks, the most recent being Bank of Sandy Springs, which he founded in 2013.  BoSS was acquired by CenterState Bank in 2020 and Chris now serves as the Area Executive for CenterState's northeast metro region that includes Sandy Springs, Buckhead and Tucker.